“Christmas on Cellblock 9” was recently named 2020s Best Original Christmas Song at the Red Carpet Awards in The Netherlands. See Your Shadow’s fun and whimsical holiday tune about a case of mistaken identity received the honor which is picked by an international panel of judges and music industry insiders. The song written by SYS Artistic Director, Michael “The Metropolitan Cowboy” Coleman along with collaborator Drew Middleton made its debut last holiday season along with the funny music video which was also directed by SYS Artistic Director, Michael Coleman. See Your Shadow plans to release “Christmas on Cellblock 9” again this holiday season, and a screenplay based on the song is also in the works. 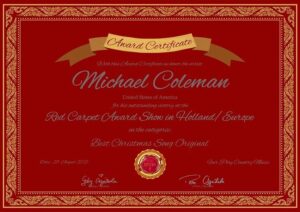